Report from the Garden Front

The church garden lives in constant threat from rabbits and deer. Shortly after the garden fence was built, baby bunnies were observed hopping through the new metal fencing to eat the tender crops.

Fine mesh chicken wire was installed, and the situation seemed to be under control for some time. The neighbors, however, saw deer and some of the plantings around the church grounds looked suspiciously nibbled, so when this year’s crop of green beans was attacked, we assumed deer must be to blame.

Very quickly, a skilled crew consisting of Ken Heischman, Jim Strandberg, and I erected a high fence made of 8’ treated poles and deer netting. See below.

Unfortunately, however, the garden was not safe for long. When I arrived to survey the damage and look for deer tracks, I discovered, instead of a deer, a small rabbit standing among severed green beans.

He was wide-eyed but not innocent. Slowly I chased him around the garden several times until he escaped though a small gap in the chicken wire. When I went to get some tools, he hopped right back into the garden. After another chase, he left through the same opening. The next door neighbor came over to help me, and the gap was closed.

As you come and go around the church, admire the garden and its impressive fence, but report violations of the defense perimeter– 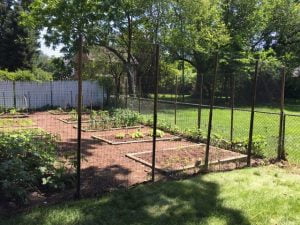 Learn how to help the family of a pregnant mom, killed two days before Christmas, in this week’s announcements.

Who in the World Cares?

Rev. Ulrich shows how much God cares, through the story of Jonah.

From Obstacle to Opportunity

Rev. Tom Ulrich teaches how God can take an obstacle and turn it into an opportunity.

More Than A Meal

Read how an upcoming event will be more than a meal in this week’s announcements.

This week’s announcements have information about several upcoming events.